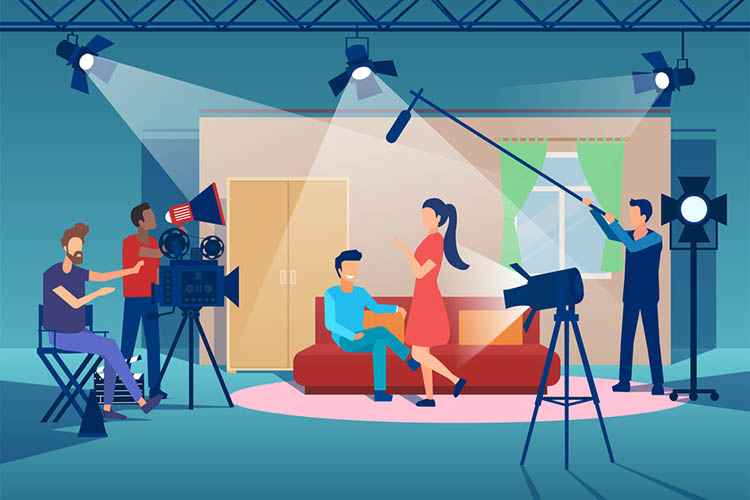 Have you ever seen one of that behind-the-scenes footage or maybe a gage reel of your favorite film or series? Well, chances are high that you have seen a particular large microphone on a pole hovering above the actors. This is called a boom microphone, which is operated by somebody called the boom mic operator.

The boom mic operator is an integral member of the sound crew. In this article, we will introduce this particular job, the responsibilities anchored to it, and everything else you need to know to revolve around the role of the boom mic operator.

What is a Boom Operator? Despite initial appearances, being a boom mic operator doesn’t entirely consist of hovering the boom microphone atop the actors during filming. No, it takes more skill and know-how to land this type of job in the film industry.

Besides being responsible for recording dialogues clearly, the boom mic operator also acts as an assistant to the production sound mixer, which means they need to have considerable knowledge in this field, namely the audio equipment used in film production.

The boom mic operator should also be aware of where the cameras are located to properly position the boom microphone at an angle that isn’t captured on video. This is far more difficult than it sounds, especially if the scene requires the actors to move around the set. In addition, any shadow cast by the boom mic will lead to a retake of the scene. Hence, the boom mic operator needs to be mindful of their movement.

Along with being present alongside the cameraman during filming, the boom mic operator also works in tandem with the sound mixer. The two will need to work as a cohesive unit to ensure that the most precise audio quality of the dialogue and other sound effects are correctly captured. In addition, a skilled boom mic operator can help the production studio save its budget by preventing any need to re-record any dialogue during post-production.

Another required skill of a boom mic operator is knowledge of operating all the sound system equipment on the set. In addition, they should be able to conduct proper testing of the equipment and should be able to troubleshoot any issues that may arise concerning said sound equipment.

What Does a Boom Operator Do?

The boom mic operator has two prominent roles during production. Their primary functions include:

Aside from the primary responsibilities on set, the boom mic operator is also expected to be adept in other areas as well, specifically:

What Equipment Do Boom Operators Use? The boom mic isn’t precisely a particular type of microphone recorder. Instead, it is a microphone suspended or attached to a retractable pole or a boom pole. Two kinds of boom mics are used in filming depending on the location.

The most common one is the shotgun microphone, a large mic with excellent noise cancellation capability, making it perfect for shooting outdoors. The small diaphragm microphones or hyper-cardioid mics are also ideal for indoor scenes as they have excellent neutral sound recording capability and can capture audio in fine detail. Pretty self-explanatory, the boom pole is a long, retractable pole that the boom operator holds and is where the boom mic is attached to. Ever notice how the boom mic appears to have a fuzzy fur covering? Well, this isn’t for aesthetics and is called a mic blimp. The mic blimp is an essential accessory to the boom mic as it further enhances the noise cancellation capability of the microphone. It also has the unfortunate distinction of having the less-appealing nickname of “dead cat” due to its weathered furry appearance.

The shock mount is a mechanism attached to the bottom of the boom pole. Not only does the shock mount stabilize the rod and help keep the microphone in place, but it also acts as a shock absorber of sorts for the boom mic. Any vibration on the ground can cause a low-rumbling sound that may ruin the audio recording. The shock mount prevents this by avoiding contact between the boom pole and the surface.

The fisher boom is a piece of specialized equipment that a boom mic operator uses to enhance further their precision in controlling the boom mic and pole. The boom operator can also significantly extend the overall reach of the boom mic when using the fisher boom.

What Skills Do Boom Operators Need?

Those are just the core criteria of a good boom mic operator. Of course, studying for a degree in film and sound engineering/design/production is also a plus. Still, as with everything in the film industry – practice and experience will be a far more essential quality.

Besides complex knowledge regarding sound recording equipment, a boom mic operator must also be in good physical condition. Operating a basic boom mic for several hours per day during a span of months can be exhausting, to say the least. A good upper body strength will make things considerably easier for those looking to enter the film industry as a boom operator.

Along with being in good physical condition and knowing how to operate special audio recording equipment, it is also a good idea to add in the skill to troubleshoot or repair said sound equipment when needed.

Finally, being adept at memorizing scenes will also greatly benefit a boom mic operator. Knowing the script will help a boom operator to adjust the mic towards the right actor during conversations. For scenes with multiple characters are conversing, a boom mic operator who knows the script can effortlessly switch between actors to capture the best and clearest quality audio recording.

Do You Need to Go to School to Be a Boom Operator?

One of the crucial questions for those who wish to enter the film industry as a boom mic operator is what type of education you will need – or if education will be a significant factor in this field. However, a degree is not strictly mandatory, even if about half of boom operators in the industry have one.

It is possible to land a job as a boom mic operator with only a high school degree or a GED. However, the experience will be the key driving factor in this field, and having practical experience can elevate one’s resume above the competition.

That said, having a college degree in a field connected to filmmaking will significantly help your chances. In addition, having a degree or even a master’s in a related field to filmmaking can further expand your career, wherein you will only use the boom mic operator position as a stepping stone.

How Much Do Boom Mic Operators Make? The boom mic operator is an entry-level job in the industry, so don’t expect it to have lucrative pay. For example, the basic per-hour income of a boom operator in California is around $15.70, with an average annual salary of $72,000.

Of course, the project will largely factor how much the boom operator will make during production. A low-budget indie film will pay significantly less than a big-budget studio-funded movie. For example, boom mic operators who work in low-budget movies typically earn around $40,000 per year compared to those who work on studio tent poles which can easily surpass a $100,000 annual salary.

Boom mic operators are also entitled to minimum wage due to being represented by IATSE Local 695, a labor union for sound engineering and film production technicians.

While freelancing is an option for boom operators, the payment will be on the lower end of the spectrum. For those who wish to earn higher wages, joining a union should be on the immediate agenda (such as IATSE local 695). Joining a union will also improve chances of landing a job on big-budget films with equally higher pay.

Another advantage of joining a union is the added benefits of having health care coverage, retirement savings, and paid leave.

Getting into the film industry via applying as a boom mic operator is an excellent way to be exposed to the inner workings of movie making. However, without experience, being a boom operator in small indie film projects is the only way to go. In most cases, this will initially be volunteer work. Still, while it doesn’t pay traditional currency, it offers vital experiences that can widen the door of opportunity in the future.

It is also essential to start making connections with people in the film industry. Building these connections can also further improve the chances of landing paying jobs as a boom operator. Once experience is gained, and more connections are made, the opportunities outside boom mic operating starts opening up.

Depending on one’s goals or education, this can lead to a career in sound engineering, cinematography, or directing. To help grow in this field, here are several vital pieces of advice to keep in mind: As stated earlier, the boom operator position is an entry-level job within the sound production crew. It is a relatively easy job to get into, specifically as a volunteer, and with adequate experience, better-paying jobs will start to appear. Being a boom mic operator is also an excellent way to learn about the ins and outs of the film industry. Boom mic operators can open up various careers in the sound department. It is not uncommon for a boom operator to land senior-level sound production jobs in the future.