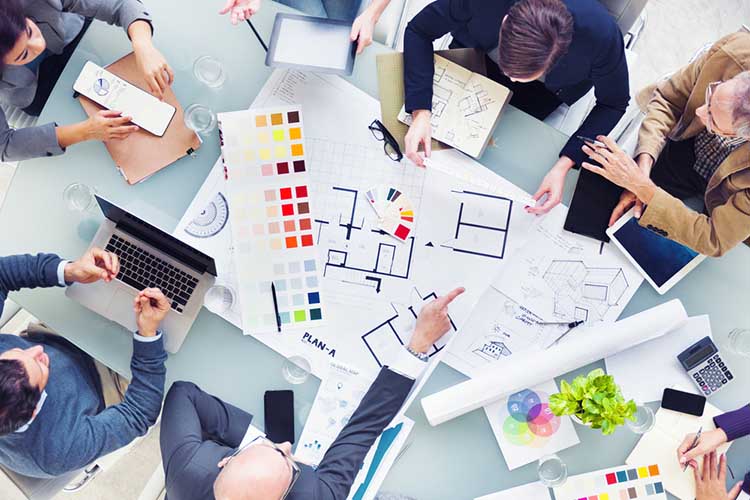 What roles do graphic designers play in today’s world?
Talk about variety! People with talent can find themselves awash in career options if they explore the field of graphic design, a niche best described as a “form of communication that uses colors, shapes, images, and words to create visual content that surrounds us in many forms—namely, print and digital media,” by the Coursera website.

This field is diverse and so exciting, it’s impossible to become bored, whether employed by an agency, web design firm, marketing entity, publisher, or retail enterprise. For those seeking a non-profit gig, work in this niche comes with extra rewards, but for those who want to control their destinies, an abundance of freelance work exists, so the sky is the limit.

Typefaces (aka fonts) have become familiar choices to anyone doing desktop publishing, but once-upon-a-time, these type styles were the exclusive domain of graphic designers who knew how much a sentence set in Papyrus could contribute to the way readers perceive the written word. Helvetica is considered the most recognizable of all fonts and director Gary Hustwit’s documentary digs deep beneath the world of typefaces to explore the impact of typography on culture. A favorite of film festival goers, this documentary lives up to the review New York Sun reporter Steve Dollar wrote: “After watching Helvetica you’ll never look at the world in the same way again. That’s because you’ll suddenly start noticing what this smart, breezy documentary about the font abundantly illustrates: Helvetica is everywhere.”

The Pixar Story Official Trailer from Iwerks & Co. on Vimeo.

The prolific Steve Jobs was one of the founders of Pixar Animation Studios, “an American computer animation studio known for its critically and commercially successful computer animated feature films,” notes the company website. This intriguing documentary chronicles the company’s meteoric rise to prominence while recognizing its unique place within the ultra-hot niche of computer animation. For graphic design students eager to break into CGI (Computer Generated Imagery), Pixar is mecca, which is why Tom Hanks, Michael Eisner, George Lucas, and other legends participated in the making of this documentary:

Graphic designer Timur Kiklu explains that graphic design isn’t only an art form but a way to convey empathy, and this documentary digs deep into the importance of a solution-based project approach. For those choosing this career, an open mind and willingness to ideate, prototype, and perform tests every step of the way to make sure concepts hit the mark (in most cases, human emotion) are critical. Talent is great, say professionals but a design-thinking approach transcends talent and gets to the heart of what every client wants: “use images and words to explore consumers’ relationships with manufactured objects and their designers.” As a result, “manufactured products and people who design these objects indirectly impact our lives,” an important message Objectified sends to those interested in graphic arts:

This French documentary pokes fun at logos. It’s so clever, this film won a Prix Kodak award at the Cannes Film Festival in 2009 and the Academy Award for Best Animated Short Film in 2010. Since graphic designers are inexorably entwined in the process of logo creation, this short film is spot-on, says The NYC Movie Guru. It “perfectly blends virtually every corporate logo imaginable into every aspect of life [yet it’s] a film that intertwines cop dramas, family dramas, a 2012 style end of the world scenario and just about everything else in between.” It’s short and funny; the ultimate laugh for graphic designers who specialize in package, logo, and title design as evidenced by this trailer:

For fans of the award-winning TV show Mad Men, opportunities to get in-depth peeks at the inner workings of advertising agencies are few, but this film picks up where the series ends, examining “the rightness and wrongness of pervasive advertising as a phenomenon,” say eFilmCritic.com reviewers. The symbiotic relationship between graphic designers and copywriters is critical and this powerful movie reveals details about some of history’s most iconic campaigns, including the dairy industry’s “Got Milk?” and Nike’s “Just Do It.” Creative teams behind these campaigns offer fascinating commentary designed for graphic designers eager to be part of a team that creates award-winning ads that deeply tap human psychology. If ad agency legends like Mary Wells, Hal Riney, and Dan Wieden intrigue you, watch this film:

Long before computer graphics dominated the industry, Drew Struzan was considered the epitome of movie poster artists, illustrating commercial works by hand for Hollywood blockbusters like Indiana Jones, Back to the Future, and the original Star Wars trilogy. This documentary takes admirers and wannabes into the world of poster art as created by Drew Struzan whose early career as a graphic artist included album covers and other fantastical commercial projects. Exclusive interviews recorded at the time of Struza’s retirement include George Lucas, Harrison Ford, Michael J. Fox, Frank Darabont, Guillermo del Toro and Steven Spielberg, but these giants take a back seat to the carefully curated, freehand art that is the true star of this documentary:

They have been called the world’s most influential designers, responsible for the phrase adopted by savvy graphics professionals: “If you can’t find it, design it.” Massimo brought the typeface Helvetica to the U.S. in 1965. Lella remained his creative soulmate. Together, their achievements include, “industrial and product design, graphic and publication design, corporate identity, architectural graphics, and exhibition, interior, and furniture design.” To chronicle the couple’s creative journey, designers Milton Glaser, Michael Bierut, and Jessica Helfand address the fearlessness with which they attacked high-profile projects between the 1950s to the 2000s. Produced especially for “design geeks,” this doc is a love letter to these remarkable creatives:  You’ve seen their work. You just never knew who produced it!

You may be familiar with the name Disney, but there’s a graphic designer who is an industry legend when it comes to animating and illustrating the industry’s most high-profile projects: Floyd Norman. Norman’s work is showcased within Disney, Pixar, and Hanna-Barbera productions and this 2016 documentary is a tribute to a tenacious, talented man who deserves recognition for both his innovation and stamina. Told as a child that his goal of working for Disney Studios was impossible because he was Black, Norman doggedly pursued his dream and despite being fired in 1965, he reinvented himself into what one colleague called “the Forrest Gump of animation.” For graphic designers seeking inspiration, no documentary surpasses this one: http://www.floydnormanmovie.com/#popUp03.

Industry movers and shakers call this documentary “long overdue.” It’s the first historical overview of the speed with which graphic design moved primarily from a hand-drawn medium to the domain of analog machines over three decades. The graphic design student’s tutorial is not limited to methods and tools. It also explores the ways typefaces and images go from creative idea to finished product. Sound boring? It’s not. This documentary provides an overview of the industry between the 1950s and the 1990s that covers evolving social roles that produced the digital artisans making up today’s graphic design industry (https://www.graphicmeans.com/).

Can graphic designers help shape the destiny of a nation simply by producing iconic images? That question is answered within the body of Design Canada, a film that goes above and beyond to show that “The best graphic design can look so natural that we forget [it] had to be invented.” Focusing closely on the elegant designs chosen for Canada’s most prominent symbols — including replacing the flag of “the Union Jack with Jacque St-Cyr’s red-and-white maple leaf in 1965…” — this documentary is not just an homage to Canada’s creatives but it shows that “Graphic design provided a powerful, visual means of communicating the country’s newfound confidence,” a taste of which you can get via this trailer:

Drew: The Man Behind The Poster

Drew: The Man Behind The Poster