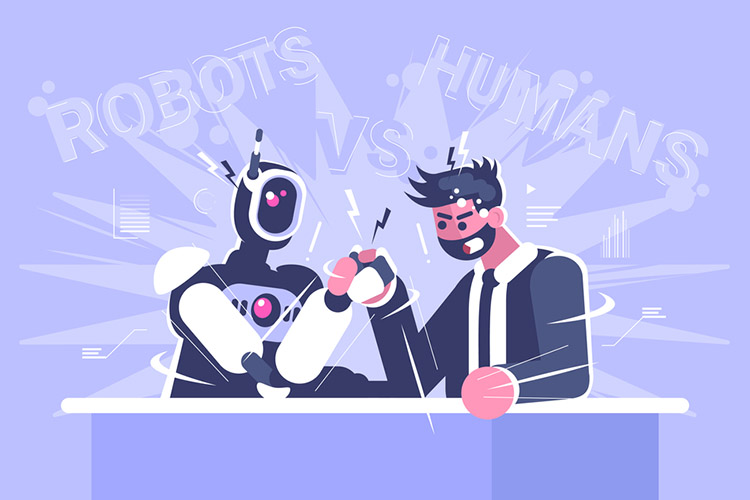 Person or Man vs. Technology is a literary technique where the protagonist is faced with a problem involving a man-made invention. A common theme in science fiction stories, this type of conflict allows the creator explores innovation and technology, as well as criticize present-day societies.

Frankenstein by Mary Shelley is one example. The story revolves around the main character Dr. Victor Frankenstein and his scientific creation—at first a perfect creature, but would later turn out to be a monster.

Below, we’re featuring films that are under this same sci-fi category; stories of how man fights with their own inventions, and machines such as robots and gadgets. There’s the 1968 film about a team of astronauts and a supercomputer in Stanley Kubrick’s 2001: A Space Odyssey, a 2021 animation about a family versus robots in The Mitchells vs The Machines, and an AI deceiving its creator in Ex Machina.

Like our article on Movies Using Person vs. Supernatural Conflict, we’ll briefly explore the film’s theme and talk about some must-know details like awards and sequels.

Directed by the Wachowskis and starring Keanu Reeves, Laurence Fishburne, Carrie-Anne Moss, and Hugo Weaving, The Matrix is a sci-fi film about a dystopian future where humanity is trapped in a simulated reality, a computer-generated world with machines created to control humans.

Neo (Reeves), a computer hacker, is led by Trinity (Moss), to an underworld where he meets Morpheus (Fishburne).  When Neo discovers the truth, he joins a rebellion against the Machines.

The film is set in a dystopian future in Los Angeles in 2019. Synthetic humans called replicants, bio-engineered by a corporation that works on space colonies. Rick Deckard (Ford), an old Replicant Hunter, was tasked by his boss to continue with his old job and eliminate four Replicants who returned to Earth. Before begins his job, however, he meets and falls in love with a Replicant girl.

Blade Runner had mixed reviews at first, but it became a popular cult film in the years that followed. Today, it’s regarded as one of the best sci-fi films of all time. It has a number of follow-up films, like Blade Runner 2049 by Denis Villeneuve in 2017, and an anime series in 2021.

Created by James Cameron and Gale Anne Hurd, The Terminator, now part of a franchise of action sci-fi films was released in 1984. The film stars Arnold Schwarzenegger, Linda Hamilton, and Michael Biehn.

The story is about how an indestructible cyborg assassin, a Terminator, travels from 2029 to 1984 to kill a woman named Sarah Connor (Hamilton), whose life will bear great significance in the future. Sarah, whose unborn son is the key to the future salvation of humanity, is being protected by Kyle Reese, also from the future. Kyle needs to find Sarah before the Terminator carries out the mission.

Wall-E is a 2008 computer-animated sci-fi film by Pixar and Disney directed by Andrew Stanton and stars the voices of Ben Burtt, Elissa Knight, Sigourney Weaver, and John Ratzenberger.

It is the distant future, a deserted 2805 Earth where humans have left Earth on a giant ship called Axiom because of piled-up garbage. A solitary robot Wall-E (Waste Allocation Load Lifter Earth-class) is tasked to clean up. Wall-E, who has been cleaning the planet for 700 years, has become lonely. He is visited by EVE (Extraterrestrial Vegetation Evaluator), a probe sent back to Earth on a scanning mission. As Wall-E follows her across the galaxy, he falls in love and goes on a journey that can change mankind’s fate.

During its release in 2008, it was considered by critics the best film of the year. It won the Best Animated Feature at the Academy Awards and was voted 29th (among 100) in the best films of the 21st century.

Starring Jessica Biel, directed by Rob Cohen and written by W.D. Richter, Stealth is a 2005 military sci-fi film that tells the story of three fighter pilots who are in a top-secret military program that aims to bring an AI program under control.

The film was unsuccessful, earning less than the shooting budget. It was also one of the worst losses in cinematic history. Ben Gannon (Lucas), Henry Purcell (Foxx), and Kara Wade (Biel).

The Mitchells vs The Machines

Another computer-animated film, The Mitchells vs The Machines is a 2021 sci-fi comedy by Sony Pictures Animation. Directed by Mike Rianda and starring the voices of Abbi Jacobson, Danny McBride, Maya Rudolph, Eric Andre, and Olivia Colman, the film tells the story of a family that faces a robot apocalypse.

Katie Mitchell is an aspiring filmmaker who has recently been accepted to a California film school. Before she starts school, her technophobic father Rick takes the entire family on a road trip. While on their way to Katie’s school, the family not only faces challenges with their relationship with one another but gets caught in the middle of a robot uprising. Suddenly, it’s up to the Mitchells, an ordinary family, to save the world from robots.

2001: A Space Odyssey is a 1968 sci-fi film co-written and directed by Stanley Kubrick. The film was inspired by co-writer Arthur C. Clarke’s “The Sentinel” and other stories and stars Keir Dullea, Gary Lockwood, and William Sylvester.

Many generations ago, during the dawn of humanity, an alien monolith pushed apes to develop tools, invent, and learn how to survive.  Fast forward to 2001, when Dr. Dave Boman (Dullea), Dr. Frank Poole (Lockwood) together with a team of astronauts, are sent on a voyage to Jupiter with HAL, the world’s greatest supercomputer with a human personality. During the mission, Dr. Bowman discovers faults in the spacecraft’s system and discovers new information that leads to a face-off between man and machine.

The film and the novel were conceived simultaneously. It did not gain commercial success at the time of its release, but today it’s considered one of the best sci-fi and most influential films ever made.

The film is about Caleb Smith (Gleeson), a programmer who was selected to be a part of an experiment with synthetic intelligence in an intelligent humanoid A.I.  He is brought to the home of Nathan Bateman (Isaac), the CEO of the company he works for. There, Nathan introduces him to a servant named Kyoko (Mizuno) and Ava, the female robot named Ava, the subject of his task of performing the Turing test. What comes after is a thrilling game between the intelligence and deception of both man and robot.

This is a directorial debut by Garland, who started his career as a writer. One of his first critically-acclaimed works is The Beach, which has an equally successful movie adaptation. The film has most of its scenes shot in Norway, near the town of Valldal.

Ex Machina received praise for the direction and performances of the cast. Some of its awards include an Oscar for Best Original Screenplay and a Golden Globe for Best Supporting Actress for Vikander.

This film was based on the 1992 novel by Robert Silverberg and Isaac Asimov, one of the greatest sci-fi writers of all time. Directed by Chris Columbus and starring Robin Williams, it follows the story of an android developing human qualities.

A robot named Andrew (Williams) is introduced to the Martin family. His tasks involved housekeeping, maintenance, and other household duties. Over time, however, Andrew discovers creativity, emotions, and other human traits.

Filmed in San Francisco and California, Bicentennial Man had mixed reviews. It received an Academy Award nomination for Best Makeup.

Last but not least is another one by Alex Garland, a psychological horror based on the 2014 novel of the same name by Jeff VanderMeer. The 2018 film stars Natalie Portman, Gina Rodriguez, Jennifer Jason Leigh, and Tessa Thompson.

Lena (Portman) is the wife of a missing biologist who has disappeared and is presumed dead. After 12 months after the disappearance, she and a group of explorers enter a quarantined disaster zone and an electromagnetic field called “The Shimmer.” Here, there are mutating plants and animals, biological transmutations, and other unexplainable phenomena that the group will try to comprehend.

The film was shot around London and East Anglia in England. It was released both in cinemas and on Netflix, with many saying that despite the box office flop, it could be a cult classic in the future.

Other Types of Conflict in Film: