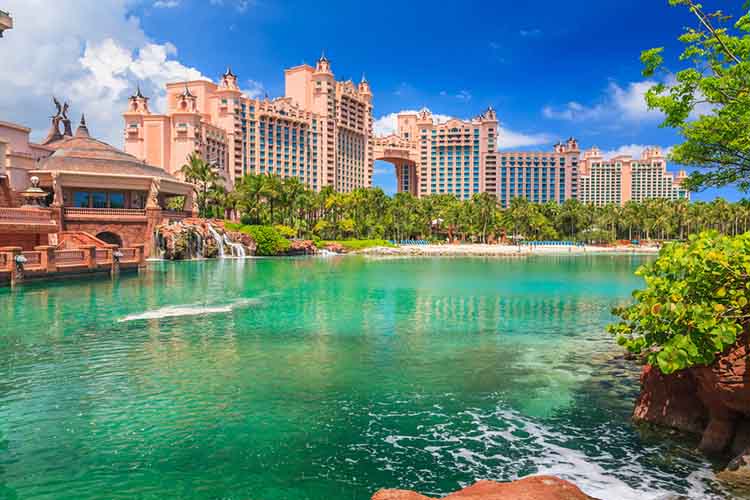 Located in the North Atlantic Ocean, the Bahamas is a Caribbean country and one of the supreme destinations for vacationers looking for fun and relaxation in the sun. It encompasses more than 700 islands, with many of them not even inhabited.

Andros, at 2,300 square miles, is the largest of the islands, but it’s New Providence that is the most populated, with about 70% of its nearly 400,000 residents living here. The terrain is relatively flat almost everywhere, with the highest elevation only being 206 feet at Mount Alvernia on Cat Island.

People flock to the Bahamas beaches and resorts, such as Atlantis Resort on Paradise Island and its waterpark and open-air marine habitat. There are also the country’s blue holes, with Andros Island’s 200 blue holes being the most in the world. And Dean’s Blue Hole on Long Island is the second-deepest one in the world. Scuba diving opportunities in the Bahamas are also quite well known.

There are also unique places to check out like Pig Beach on Big Major Cay, which is populated by feral pigs and the Andros Barrier Reef, the third-largest barrier reef in the entire world. Then there are their pink sand beaches on Harbour Island, not something you can see just anywhere.

Due to its natural beauty, lovely weather, and other unique characteristics, the Bahamas has also been known to be the location for many films over the years, either posing as itself or standing in for another location. Check out this list of some of the most interesting movies that used the Bahamas as a backdrop:

Movies Filmed in the Bahamas

One of many movies starring Mary-Kate and Ashley Olsen, this family flick was about the twins being taken on vacation to the Bahamas. Just when they think their only adventures will be chasing (and escaping) suitors, they get caught up in a smuggling scheme. The movie also starred Megan Fox and Markus Flanagan. Most of the movie was filmed in the Bahamas.

This fantasy romance was Tom Hanks’ second-ever movie, and also starred Darryl Hannah and John Candy. Hanks’ Allen Bauer falls for Hannah’s Madison, except he’s a human and she’s a mermaid, which makes their relationship a bit on the complicated side. Some filming was done on New Providence Island.

The fourth and final movie in this horror film franchise, this one starred Lorraine Gary, Michael Caine, and Lance Guest. After Ellen Brody loses her son to a great white shark, she heads to the Bahamas for some relaxation, only to find that the shark has followed her there too. Some filming was done in the Bahamas. 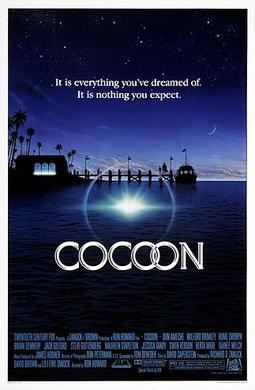 This dramedy was director Ron Howard’s fourth film and starred Don Ameche, Wilford Brimley, and Jessica Tandy, among many others. It centers around a group of old folks whose lives get altered (and also rejuvenated) by aliens. While most of it was done in Florida, there were some scenes filmed in Nassau.

This romance was both set and filmed in the Bahamas, and told the story of two men who fall in love and their experiences with homophobia within the country and with their close relations. It starred Johnny Ferro and Stephen Tyrone Williams. It was filmed exclusively in the Bahamas.

This adventure movie was a remake of a 1963 film (with a TV series that ran from 1964-1967 following) and starred Paul Hogan and Elijah Wood. When a young boy has to spend his summer in the Florida Keys with his uncle, he discovers more about himself, meets a girl, and makes friends with (and saves) a dolphin. All filming was done on New Providence Island.

Movie number twenty-one in the James Bond spy series, this one had Daniel Craig in the lead role. It also starred Mads Mikkelson and Eva Green. Here, Bond must take down terrorist organization financier Le Chiffre. Some filming was down on New Providence Island and Paradise Island.

This romcom starred Gérard Depardieu as a divorced father who takes his teenaged daughter to the Bahamas for a vacation. He’ll do anything to make her happy, including pretending to be her lover in order to make her crush jealous. It also starred Katherine Heigl and Dalton James. Some filming was done on Paradise Island.

Based upon Thomas Harris’s 1988 book, this horror thriller starred Jodie Foster, Anthony Hopkins, and Scott Glenn. In order to catch the serial killer Buffalo Bill, FBI agent Clarice Starling must get herself acquainted with an already-convicted serial killer, Hannibal Lecter. While most scenes were done in the United States, there was one scene done at the Bimini Airport in the Bahamas.

The fourth movie in the James Bond spy film series, this one had Sean Connery in the lead role, trying to take down SPECTRE, who has two atomic bombs ready to detonate if the world doesn’t pay up 100 million pounds. Bond heads to the Bahamas in the movie and scenes were done on New Providence Island, The Exumas, Paradise Island, and West Providence Island.