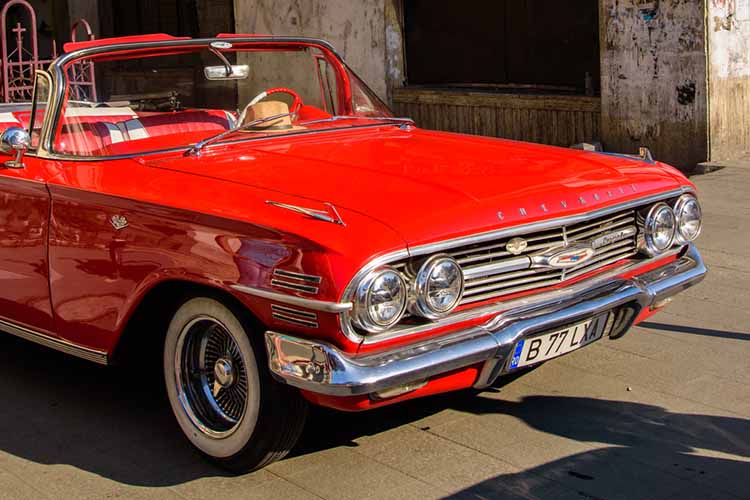 Cars, the toys for the big boys (and girls), are typically an element in films that evoke hard-hitting and adrenaline-pumping thrills. However, these steel chariots of modern times have a certain cool charm to them that gearheads love. From the powerful beastly machine underneath the hood to the stylish aesthetic of the body, cars can further enhance the appeal of a movie when done right.

There is no shortage of “car movies” for car enthusiasts to sink their teeth into. The variety of movies that feature cars as one of their central elements are aplenty, and there is something for every car lover.

So, from edgy thrillers to over-the-top action extravaganzas, here are the best movies that every car enthusiast should watch.

We decided to only include three specific films in this car lover’s wet dream of a franchise. The reason? These are the three entries that still retained a sense of grounded realism. Before Dominic Toretto (Vin Diesel) and his “family” upgraded to vehicular battles with tanks, submarines, drones, and rocket cars – the movie series was exclusively about fast cars and illegal racing.

The first three entries in the Fast and Furious franchise hold the most eye candy for car enthusiasts. However, we cannot deny that this action-packed movie franchise is the most popular in the genre today. The cars that have graced this franchise will make any car enthusiasts swoon.

From the classic 1970 Dodge Charger to the 1994 Toyota Supra, The Fast and the Furious series will always put some of the best and most stylish cars in the world front and center. So what else can a car lover wish for in a movie?

While significantly more subdued than our first entry, Drive is still a worthwhile flick for car lovers with its dark and gritty vibe, intense car chases, and outstanding 80s synth soundtrack. The movie stars Ryan Gosling as a mysterious getaway driver named “The Driver” in the film’s credits. The movie is also shot in Los Angeles, which offers a stark contrast between the bright and arid day scenes and sleek neon light-infused night scenes.

The movie was quite divisive with the audience due to how it was marketed as they made it seem like a Fast and Furious-style movie. When in fact, Drive is a brutal and dark crime thriller. However, if you watch the film without that expectation, you will see a sleek and stylish crime thriller with some nice driving scenes thrown in.

The director even managed to snag the Best Director Award during the 2011 Cannes Film Festival. For film and car enthusiasts, they will love the homage of Drive towards the classic 70s and 80s car movies. Also, a strong cast consisting of Bryan Cranston, Carey Mulligan, Oscar Isaac, Ron Perlman, and Albert Brooks will surely hook you from start to finish line.

We will be going with the 2000 remake over 1974 original for two simple reasons, Nicholas Cage and Angelina Jolie. Oh, and the 2000 version also features a broader variety of cars, from the classic 1953 Chevrolet Corvette to the brand new hotness (at the time) that is the 2000 Porsche Boxster.

This heist film is pretty much an homage to the classic cars. Honestly, it feels like it was made for every car enthusiast in the world with its collection of fifty stylish automobiles from different generations. The film’s car chases and action set pieces are all over-the-top fun, and the movie itself is oozing with style and charisma.

The collection of fifty iconic cars that master thief Memphis Raines (Nic Cage) plans to still in under 96 minutes is pure eye candy for car lovers. From the 1953 Chevrolet Corvette, 1969 Dodge Daytona, and Aston Martin DB7 – this movie is a highlight reel of all the classic automobiles from different generations.

Car enthusiast gamers will be pretty familiar with the popular racing game franchise Need for Speed. The videogame series has been around since the 90s and is still going strong today. The 2014 adaptation of the beloved racing game franchise pretty much hits all the marks that fans of the game love. While the film adaptation didn’t set the box office ablaze, it pretty much did what is expected, providing car lover adrenaline junkies a pedal to the metal thrill ride.

The movie stars Aaron Paul as street racer Tobey Marshall who participates in an illegal cross-country race to get revenge on his former friend and ex-partner, Dino Brewster (Dominic Cooper), for the death of a close friend. The movie is one big race and chase scene that features fantastic automobiles such as the Lamborghini Sesto Elemento and the McLaren P1.

The film director, Scott Waugh, also decided against using any CGI special effects in the movie. So all of the pulse-pounding chases and crashes you see there are all done using practical effects. In addition, the cross-country race scenes were shot in locations across the U.S., specifically Atlanta and Detroit.

The legendary Steve McQueen stars in this iconic neo-noir action thriller that has become a staple in every car lover’s favorite movie list. McQueen plays Frank Bullit, a San Francisco renegade cop who faces off against the city’s criminal underbelly and takes down the mysterious kingpin behind it all.

The movie is shot on location in the streets of San Francisco, and along with the Steve McQueen, the film also has another iconic element, the signature Highland Green Bullit Mustang ‘559. This iconic car has become synonymous with San Francisco streets. The movie also distinguishes itself as having one of the greatest car chases that effectively revolutionized how films shoot that type of scene.

If ever there is a definite must-watch in this list, Bullit is the movie that earns that recognition. An actual classic “car movie” that combines one of the coolest actors of all time with one of the most iconic cars in the industry.

While we could have gone with the 2003 remake, we decided to give the spotlight to the 1969 original. This classic comedy heist film has become a cult classic within car lover circles. While the 2003 version does feature an upgraded and elegant collection of top-tier cars, the original will always have a special place in car enthusiasts’ hearts.

The movie stars Michael Cane as the charismatic Charlie Croker, the leader of a Cockney gang who concocts a plan to steal a gold shipment in Turin, Italy, during a staged traffic jam. The film features a fantastic array of automobiles from the signature red, white, and blue Mini Coopers and Lamborghini Miura, Aston Martin DB4, and the Jaguar E-Type.

The Italian Job indeed laid much of the groundwork for modern movie capers today, and it earns its spot as one of the true cult classic car flicks in history.

Baby Driver is a blend of different genres that, on paper, shouldn’t make any sense. However, with the talented Edgar Wright in the director’s chair, Baby Driver delivers a wholly fresh experience for moviegoers while homage to the classic car chase sub-genre. This movie is a mixture of action, romance, comedy, thriller, musical, and epic car chases.

Starring Ansel Elgort as the titular music-obsessed and highly skilled getaway driver, Baby, the movie brings a lot of heart to the table with Elgort’s performance. The film also brings a fantastic cast to round off the characters, such as Baby’s mob boss, Doc (Kevin Spacey), the Bonnie and Clyde couple Buddy (Jon Hamm), and Darling (Eiza Gonzalez), and the sociopath gangbanger Bats.

The movie blends a fantastic rock soundtrack with exciting car chases and frenetic camera work—those who have yet to watch this film gem do so now. Baby Driver is that film if you are looking for a movie with some of the most insane car stunts in recent memory.

The 2005 movie Initial D is the live-action adaptation of the beloved manga (Japanese comics) and anime (Japanese animated series). This movie is all about Japanese tuner cars’ underground culture, opposite American muscle car culture. Initial D is all about the art of “drifting,” where a car slides across the road making impossible sharp turns without slowing down.

Most American audiences got introduced to this driving style in the third installment of The Fast and the Furious series, appropriately subtitled Tokyo Drift. However, drifting and car tuning have been around since the 90s. This different breed of street racers began on the mountain roads of Japan, where the road curves are both treacherous and dangerous.

Initial D has garnered quite a decent international following which helped the franchise reach U.S. soils. You can find it on DVD, Blu-Ray, and on streaming services such as Netflix if you are interested in movies about drift car racing. For car enthusiasts, the film features customized automobiles such as the Toyota Sprinter Trueno AE86, Subaru WRX STI Type R, Mazda RX-7 Turbo II, Nissan Skyline GT-R, and the Honda S2000.

The Mad Max film series is considered one of the greatest “car movies” of all time. While the film isn’t precisely grounded as the world of Mad Max is set in a dystopian post-apocalyptic world, we can’t deny the movies have some of the most insane vehicles put on film.

For this particular list, we decided to go with the most recent entry, Mad Max: Fury Road, which stars Tom Hardy as the titular “Mad” Max Rockatansky and Charlize Theron as the hardened yet compassionate Furiosa.

Fury Road features insane vehicles of war, fully customized and stylized to fit the cutthroat world of Mad Max. In addition, director George Miller wanted as many practical effects and stunts as possible. As a result, the car chases and stunts in the movie are all done using practical effects.

Mad Max: Fury Road is also one whole car chase scene stretched to almost two hours, and it is one of the most adrenaline-pumping action flicks to come around in recent times. You will not be disappointed with this future classic, and the monstrous vehicles in the movie are something out of your nightmares… or, since we are all gearheads here, most beautiful dreams.

This 2019 movie is based on the actual rivalry between two of the biggest car manufacturers in the world, Ford and Ferrari. The movie is undoubtedly a tour de force in the acting department, starring acting juggernauts Christian Bale as hot-tempered driver Ken Miles and Matt Damon as Carrol Shelby.

The real-life story is also quite fascinating. The rivalry between Ford and Ferrari pretty much ignited when Ferrari refused the offer of Ford to purchase the Italian company. This, in turn, made Henry Ford II obsessed with beating Ferrari in the 24 Hours Le Man’s race.

Besides the classic cars on full display, the movie also explores friendship, the will to win, and everything that transpired behind the scenes during these big international races – both the good and bad. Of course, since this is a movie with Ford and Ferrari on the title, expect to see a parade of stunning classics from both car brands.