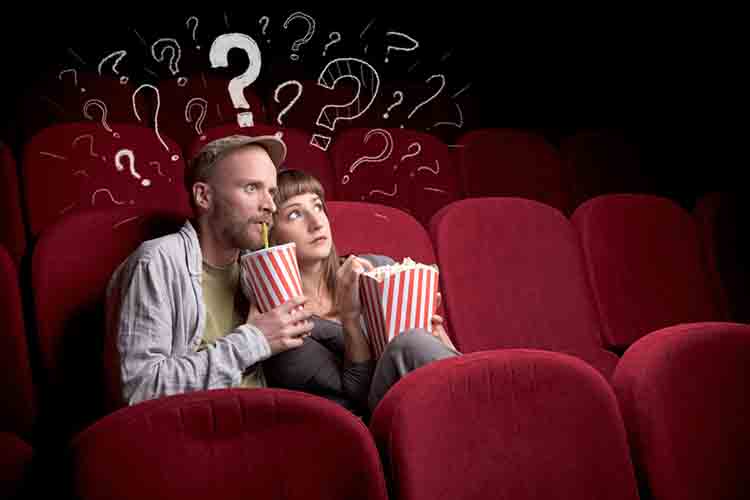 Being Stanley Kubrick’s final film, Eyes Wide Shut certainly garners solid attention by that merit alone. However, the film itself can be considered one of the celebrated filmmaker’s best works as it combines all of the subtle thematic nuances that Kubrick’s films are known for. Visually, the movie creates a rather unsettling atmosphere throughout, another signature style of Kubrick.

If you want to go on another mysterious and fever dream viewing experience similar to Eyes Wide Shut, here are ten of the best other movies with similar styles and themes.

Movies That Are Similar to Eyes Wide Shut

Roman Polanski directs the Ninth Gate; it is a neo-noir horror-thriller starring Johnny Depp as a rare books dealer, Dean Corso. Corso is contacted by an arcane book collector Boris Balkan (Frank Langella), who claims to have come into possession of the rare Ninth Gates of the Kingdom of Shadows book. The book is told to have incantations that can summon the Devil, and Balkan wants Corso to verify its authenticity.

Skeptical but drawn by the exorbitant fee that Balkan is prepared to pay, Corso flies to Portugal and France to investigate The Ninth Gates of the Kingdom of Shadows tome. As Corso dives deeper into the book’s origins, several murders transpire with victims all connected to his investigation. These events further push Corso to learn the truth to the point of obsession.

Like Eyes Wide Shut, The Ninth Gate has a surreal theme and plot with a rich dose of conspiracy theory vibes.

Quite possibly the closest comparison in this list, Blue Velvet is a film by renowned director David Lynch. Lynch delivers a similar style and aesthetics with his fever dream and surreal direction. Some might even claim that the surrealist eroticism of Blue Velvet inspired Kubrick’s Eyes Wide Shut.

Blue Velvet is a neo-noir mystery thriller with a dose of Lynch’s signature psychological horror imagery and themes. The story follows Jeffrey Beaumont, a college student living in Lumberton, North Carolina. During a casual walk, Jeffrey discovers a severed human ear. After reporting the discovery to the authorities, Jeffrey’s curiosity gets the better of him, and he starts investigating the incident independently.

During his investigations, Jeffrey will stumble upon the mysterious underbelly of what he thought to be his idealistic town. Seduced by the temptations of a world he never knew existed, Jeffrey is at risk of falling into an abyss from which there is no escape.

This criminally underrated neo-noir thriller deserves a second chance. Despite being bombarded by negative reviews during its initial release, 8MM is undeniably a taut nail-biting thriller that delivers the same disturbing vibe as Eyes Wide Shut.

As Welles starts to uncover more and more about the figures behind the making of snuff films, his curiosity transforms into a dangerous obsession. Unfortunately, it risks devouring his personal life as well. 8MM is soaked in the same shadowy conspiracy plotline of Eyes Wide Shut, albeit the connotations in this film have a far direr and disturbing revelation.

Nicolas Winding Refn knows how to deliver films that are dripping with psychological horrors bathed in stylish neon color. The Neon Demon is a mesmerizing film about the darker side of the fashion industry. In a world built around outward appearance, The Neon Demon shines a light on narcissism, abuse, betrayal, and violence.

The movie stars Elle Fanning as Jesse, a young aspiring model in Los Angeles. Her beauty and “It” factor quickly propel her to the top. But two other models, Sarah and Gigi (played by Abbey Lee and Bella Heathcote, respectively), are starting to be extremely envious of the young Jesse’s success.

How far will Jesse, Sarah, and Gigi go to achieve their dreams in the cutthroat fashion industry? The movie’s themes focus on the two sides of narcissism. On one side, it can ruin a person, but it can also push one’s survival instincts, a trait that will undoubtedly be advantageous in an industry that is all about looks.

Director Nicolas Winding Refn gets a back-to-back nod in this list with his 2013 brutal fever dream movie, Only God Forgives. The movie stars Ryan Gosling as Julian, a quiet man who owns a Thai boxing gym. Unbeknownst to others, Julian is on the run for murder and uses his business in Bangkok, Thailand, as a front for his family’s illegal drug operation.

He gets dragged back into a chaotic and violent life when his brother is killed by a retired cop, Chang (Vithaya Pansrinarm), as punishment for killing a prostitute. This causes a chain of events, including Julian’s mother arriving in Thailand looking for vengeance. She orders Julian to find Chang and everyone involved in his brother’s murder and kill them all.

The film itself is filled with surreal moments that make you ask whether what you see in the movie is real or not. Playing out more like a twisted parable, Only God Forgives is a divisive film, but its central themes of vengeance and redemption are never lost in the carnage. It is a film that is certainly worth a watch for those who love the enigmatic ambiance of Kubrick’s Eyes Wide Shut.

Starry Eyes is an American horror film that exudes the same shadowy cult vibes as Eyes Wide Shut but focuses on Sarah Walker (Alexandra Essoe), an aspiring young actress trying her luck in Hollywood. Unfortunately, we see her not having the best of luck in her craft, in part due to a roommate who pretty much steals the roles she is auditioning in.

When Sarah gets invited to an audition by a company called Astraeus Pictures, her initial performance is met with indifference. This caused her to have anxiety attacks which triggered her hair-pulling disorder. Given a second chance, she manages to progress to a second audition. Unfortunately, during the second audition, the casting director insinuates that she needs to have sex with him if she wishes to land the role.

Disgusted and hesitant at first, Sarah relents and agrees with the condition. Stating that she wishes to be reborn. Afterward, Sarah’s body starts to deteriorate, and she is told that she needs to make sacrifices to be reborn.

The film delivers the same unnerving atmosphere and features a mysterious cult pulling the strings from behind the scene. Starry Eyes is a straight-up horror movie compared to Eyes Wide Shut, which is great if that is your cup of tea.

One day while watching a movie, he sees an actor in the background that looks exactly like him. Adam becomes obsessed with finding out more about this doppelganger of his. After a bit of digging up, Adam finally meets with his double, whose name is Anthony Claire. Physically, both are entirely identical, down to their scars.

This meeting causes the two’s lives to become dangerously intertwined, and the line between the two personalities starts to blur. The film is directed and shot in such a way that there is always a subtle, unsettling vibe around it that audiences will have difficulty figuring out.

Enemy is an enigmatic film that will keep audiences second-guessing what they are seeing. The movie also has one of the most left-field endings in cinema history. The film pretty much shifted gears and genre during the last couple of seconds, and that twist will undoubtedly leave audiences stunned.

Who better to deliver surrealist movies than the master himself, David Lynch? As stated earlier, it seems that Stanley Kubrick took several notes from Lynch’s directing style when making Eyes Wide Shut. If we are to include another David Lynch film in this list, the honor is undeniable with his classic mind-bending flick, Mullholland Drive.

Mullholland Drive is a neo-noir mystery film starring Naomi Watts as Betty Elms, an aspiring actress in Los Angeles. She befriends a woman suffering from amnesia after being in a car accident named Rita (Laura Harring).

The film does not let up with its ominous and eerie vibe, and Lynch constantly throws curve balls at the audience, which all ties up in the end. Well, as “tied up” as a typical Lynch movie anyway. Mullholland Drive is one of those film gems that is entirely incomprehensible at the first watch and demands several viewings for the overarching thread to be somewhat visible.

Darren Aronofsky’s award-winning 2010 psychological thriller masterpiece, Black Swan, is undoubtedly one of the best in this mind-bending sub-genre. Featuring a similar atmosphere to Kubrick’s Eyes Wide Shut, Black Swan is dripping with dread, ambiguity, and a dream-like plot that will have you questioning events until the very end.

The movie stars Natalie Portman as Nina Sayers, a ballerina. She is auditioning for the role of a prima ballerina for the New York Ballet production of the classic Swan Lake. While Nina is perfect as the gracious and pure White Swan, she seems to have trouble portraying the more liberated and aggressive Black Swan. A new ballet dancer, Lily, manages to play the role of Black Swan perfectly, which causes Nina’s mental state to slowly deteriorate due to the stress and fear of losing the part she worked so hard to achieve.

Black Swan makes perfect use of the unreliable narrator trope, which further adds to the unsettling events that Nina faces throughout the movie as she struggles to hold on to her sanity. Additionally, Aronofsky has pointed to the 1997 Japanese anime psychological thriller film Perfect Blue as an inspiration for some of the scenes in Black Swan. Check out that movie, as it is another classic in the psychological thriller genre.

Quite possibly the most disturbing entry in this list, Midsommar is a horror film by Ari Aster and stars Florence Pugh as Dani. Dani is a psychology student who is left severely traumatized after her sister commits murder-suicide on their parents and herself. Dani’s trauma from the tragedy also affected her other relationships, primarily her relationship with her boyfriend Christian (Jack Reynor).

In the hope of saving their crumbling relationship, the two decide to visit a remote Swedish village during their midsummer festival that is only celebrated every 90 years. However, what starts as a joyful celebration turns sinister as the villagers are not precisely what they appear to be. Something darker is looming in the otherwise sunlit North European village.

The director of the film has directly referenced Eyes Wide Shut as one of his influences in the making of Midsommar.