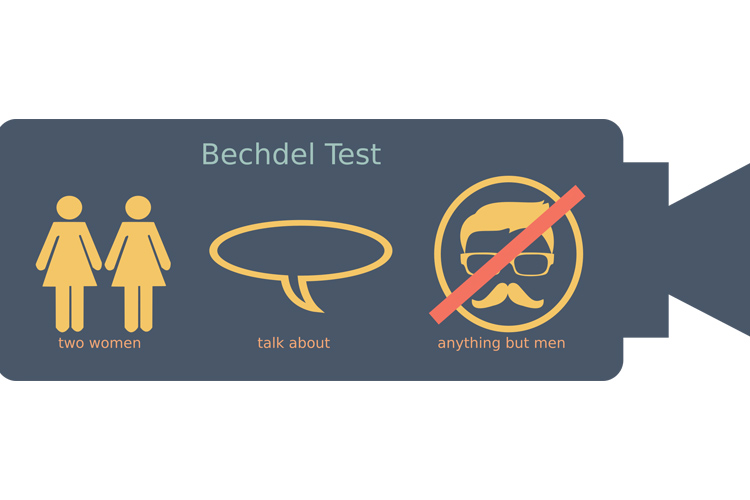 What is the Bechdel Test?

The Bechdel Test is an analysis created by Alison Bechdel in 1985 that focuses on how female characters are portrayed in films. The test examines whether two female characters in the movie will converse over a topic other than that of a particular male character or men.

The test’s importance in women’s portrayal in art forms such as movies is relatively only surface-level. However, it does help draw attention to a specific sexist issue that several entertainment mediums have unfairly portrayed or used female characters. Thus, the Bechdel Test is best treated as the minimum regarding female characterization in fiction.

That said, one cannot overlook the positive impact that this test has delivered on women’s representation in movies since its inception. The Bechdel Test or Bechdel-Wallace Test has three simple criteria that need to be met for it to pass the assessment:

1. At least two female characters in the film should be important to the plot.

2. Two female characters should converse with each other on a topic besides men.

2. Two female characters must have a scene together that is more than a minute long.

It is understandable why most of the criticism around this test is that it is primarily superficial. However, the long-lasting effects of introducing the Bechdel Test are far-reaching. They can be felt even today, with more well-written female characters becoming more common in films and other forms of the medium.

Don’t be too focused on those three prerequisite requirements, though, as there are numerous films that not only pass the Bechdel Test but also excel and elevate it. Below is a list of movies that pass and surpass the Bechdel Test while also being fantastic and critically-acclaimed movies in their own right.

10 Movies that Pass the Bechdel Test

Disney’s Frozen pretty much turned the tables on the typical Disney formula, making the film a breath of fresh air and a highly successful movie both critically and financially. It hits the Bechdel Test requirements dead center with two female leads and conversations between the two that encompass a variety of plot-essential topics.

The movie follows the tale of Princess Elsa (Idina Menzel) and her sister Anna (Kristen Bell). As Elsa prepares to assume the throne as queen, her secret is accidentally revealed to the kingdom in that she has the ability to control ice. This caused her to run away, fearing that her people would not accept her, thus plunging the kingdom into an eternal winter.

Her younger sister, Anna, goes on a quest to find her sister and convince her to return and be the rightful ruler she is destined to be. Although, at the same time, there is a love story subplot in the movie revolving around Anna and Kristoff (Jonathan Groff), the main plot centers around the familial love between the two sisters.

Despite being a special effects extravaganza about a group of intergalactic superheroes, Guardians of the Galaxy has always been pretty grounded with its characters. Both Vol.1 (2014) and Vol. 2 (2017) focus on the theme of family, especially with the second entry. While the central conflict of the movie is between Peter Quill/Star-Lord (Christ Pratt) and his ancient biological father, Ego The Living Planet (Kurt Russell), another critical story arc is the complicated relationship between Gamora (Zoe Saldana) and Nebula (Karen Gillan).

Gamora and Nebula are both adopted daughters of the tyrannical Mad Titan, Thanos. While Gamora eventually turns to the side of good, Nebula isn’t as accepting of her adoptive sister’s decisions. While the first Guardians of the Galaxy movie also passes the Bechdel Test, it is in the sequel that it wholly exceeds the criteria.

The sequel further expands the relationship between the two “sisters” while fleshing out their character’s backstories and motivations. Not only do Gamora and Nebula share several lengthy scenes, but they also have deep conversations about their missions and even an incredible over-the-top fight scene.

While the movie is exclusively narrated by a group of men who reminisce about the Lisbon sisters, the story primarily revolves around the tragic tale of said sisters. The film is set in 1970s Detroit as we follow the story of the Lisbon sisters Therese, Mary, Bonnie, Lux, and Cecilia. The sisters’ lives were a mystery to the then infatuated teenage boys due to their overbearing and protective parents.

The story mainly revolves around two critical events surrounding the Lisbon family, from the point of view of the group of male friends who were fascinated with the sisters. The relationship between the sisters is insular, making the character dynamics and interaction quite intense and mysterious to others.

Again, the film hits all the crucial requirements to pass the Bechdel Test and opts to push the envelope further with a unique, personal, distressing, and familiar story.

The 4th film by Quentin Tarantino is one of the few films with a female-centric cast that are not only well-written but memorable as well. Filled with fantastic fight choreography and violence, Kill Bill indeed subverts the typical idea of women in movies being the “damsels-in-distress_ trope. Instead, all the female characters in this two-part movie are considered to be the deadliest in their fictional world.

The film follows the bloody journey of The Bride (Uma Thurman) as she goes on a violent killing spree to take down her old teammates, an elite group of assassins called the Deadly Vipers Assassination Squad (DeVas), who tried to kill her and her unborn child many years ago. The DeVas were under orders from their leader, Bill, The Bride’s former lover.

These two films manage to pass the Bechdel Test with flying colors. From The Bride’s (whose name we later find out to be Beatrix Kiddo) antagonistic relationship with her fellow assassin, Elle Driver (Daryl Hannah), to a more respectful tone with O-Ren Ishii (Lucy Lui) and even a surprisingly sympathetic one with the assassin Karen Kim (Helen Kim).

Volume 1 and Volume 2 are chock-full of strong and interesting female characters that have become quite iconic in pop culture.

This iconic horror classic from writer William Peter Blatty still conjures up an effective scare. It also, surprisingly, passes the Bechdel Test as well. While the plot mainly revolves around the possessed little girl Regan MacNeil (Linda Blair) and Father Damien Karras (Jason Miller), who is having a crisis of fate – we cannot overlook Regan’s mother, Chris (Ellen Burstyn). The film’s first half is centered around the dynamic between Chris and Regan during the latter’s descent into demonic possession.

The scenes between Chris and Regan are not typical mother-daughter scenes, as the ones in The Exorcist are both terrifying and disturbing. Well, technically, the scene is between Chris and the demon who is possessing her daughter. Still, Linda Blair and Ellen Burstyn both deliver outstanding and intense performances. We see Chris in anguish seeing her daughter become a disturbing personification of blasphemy, and Regan transforms from a sweet girl to a vile creature who taunts and tortures her mother mercilessly.

The Exorcist features two integral female characters; both have numerous scenes that center around the horrific situation they are in. That certainly passes the Bechdel Test, but with a far more twisted and malicious result.

Aliens is considered one of the best sequels of all time as it vastly evolves from the claustrophobic and terrifying original to a more intense and epic setting, separating it enough and offering audiences a different experience while respecting the mythos set by the first film. In addition, it stars Sigourney Weaver in her career-defining role as Ellen Ripley, the sole survivor of the first movie.

Ripley’s character has also evolved to be more confident and courageous while maintaining a motherly vibe, thanks to her interactions with the young girl named Newt (Carrie Henn). Another notable female character is the tough-as-nails Private Vasquez (Jenette Goldstein), who shares several scenes with Ripley, mostly discussing their strategy to survive the incoming onslaught of an army of acid-blooded aliens.

Girl- Interrupted is an intense drama featuring outstanding performances from its two leads, Winona Ryder, and a career-defining performance from Angelina Jolie. The film follows the story of Kaysen (Ryder), an 18-year-old troubled teenager, and her star in a psychiatric hospital. During her stay, she meets Lisa (Angelina Jolie), a manipulative sociopath who further throws her into a downward spiral of confusion and frustration.

Accompanied by a tour-de-force performance from the two female leads and the supporting cast, the movie dives deeper into serious and darker subject matter such as violence and abuse. This is an outstanding drama with an equally intense performance from two talented actresses and undeniably passes the Bechdel Test with flying colors.

Spirited Away is an animated classic from the Japanese production studio, Studio Ghibli and also heralded the company as one of the premier animation studios in the world. Directed and written by the legendary Hayao Miyazaki, Spirited Away follows the adventure of a young girl named Chihiro (Daveigh Chase) as she ventures into the spirit world to save her parents.

One scene in the film that completes the requirements of a Bechdel Test is when Chihiro talks to the witch who manages the other-worldly bathhouse, Yubaba (Suzanne Pleshette). The scene has Chihiro asking Yubaba for a job in the bathhouse. Yubaba tries to frighten Chihiro away, but the brave young girl stands her ground.

Spirited Away is an award-winning Bechdel Test-passing fantasy animated film that is a must-watch for fans of the genre.

The adrenaline-pumping action epic is a modern classic in the genre and a fantastic entry into the Mad Max movie series. If boiled down to its basics, Mad Max: Fury Road is simply a two-hour car chase, but that oversimplifies it and is a disservice to the technical marvel the movie delivers.

The film follows Max Rockatansky (Tom Hardy) as he gets tangled in the lives of survivors in the ruthless and lawless wasteland and sets out to be their savior. Furiosa (Charlize Theron) is along for the ride, a strong-willed survivor who is pretty much on equal footing with Max’s fierce survival instincts.

There are also the wives of the tyrant Immortan Joe (Hugh Keays-Byrne), who asks Furiosa to help them escape. Each of the wives is beautiful and strong in its own right and adds more depth to the story, while Furiosa anchors this action-packed thrill ride as its emotional center.

A classic horror film in the making, The Witch is a genuinely unnerving tale about a family of settlers in the 1600 region of New England. The patriarch of the family, William (Ralph Ineson), brings his family to live in the untouched and virgin secluded forest somewhere in New England after being banished from their colony over a religious dispute.

His wife, Katherine (Kate Dickie), and five children are with him. The eldest daughter Thomasin (Anya Taylor-Joy), has a strained relationship with her mother. The relationship between the mother and daughter further fractures as unexplained and supernatural occurrences torment the family, with Katherine blaming Thomasin for their ills.

The movie passes the Bechdel Test with the story revolving around the two primary female characters of the movie and several tense scenes between the two, which include the disturbing climax of the film.