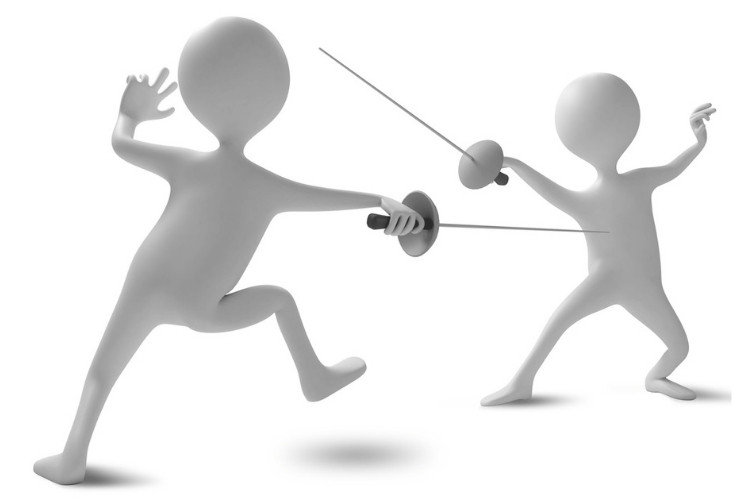 In a Person vs. Person (or Character vs. Character) conflict, the protagonist and antagonist work and struggle for victory over each other. This is a storytelling technique that pits two characters against each other, with each side having a different goal.

Below are some examples of this type of conflict in films—a character versus another character—from the classic martial arts film Karate Kid where two teenagers face off in a martial arts competition, to Disney favorites like The Lion King, about a young lion’s struggle before he succeeds his father as king. Because superheroes and fantasy stories often use this storytelling technique, we’ll have a number of them below as well.

The first part of the original Star Wars trilogy, Star Wars: A New Hope is a 1977 film by George Lucas, starring Mark Hamill, Harrison Ford, and Carrie Fisher. This is the first Star Wars film ever released.

The film was originally called just Star Wars. It was re-released in 1981 it was changed with a subtitle.

Directed and co-produced by Christopher Nolan, The Dark Knight is considered one of the greatest films of its decade. The film stars Christian Bale, the late Heath Ledger, Aaron Eckhart, Maggie Gyllenhaal, and Gary Oldman.

Lt. Jim Gordon (Oldman) and Harvey Dent (Eckhart) have been successfully helping Bruce Wayne in keeping Gotham City crime-free until mysterious criminal Joker (Ledger) starts to wreak havoc in the city. Bruce Wayne faces one of the most difficult and dangerous threats yet.

The film, which was mostly filmed in Chicago, was praised for Nolan’s directing, as well as the performance of Ledger, who was posthumously awarded an Academy Award for Best Supporting Actor.

In Disney’s 1994 animated The Lion King, the Character vs. Character conflict happens between Simba, the son of King Mufasa. Scar, Simba’s uncle, wants to be king.

Directed by Roger Allers and Rob Minkoff, the film tells the story of the young lion Simba, who will succeed his father Mufasa, as King of the Pride Lands Scar murders Mufasa to make himself king. Simba, with the help of friends Nala, Timon, Pumbaa, and shaman Rafiki, challenges Scar to prevent him from being King.

In 2019, Jon Favreau directed and produced a computer-animated version of the original, with voice acting by Donald Glover, Seth Rogen, Chiwetel Ejiofor, and Beyonce Knowles.

The Karate Kid, directed by John G. Avildsen, is a 1984 martial arts movie about Daniel La Russo (played by Ralph Macchio), a teenager who is trained by Mr. Miyagi (played by Pat Morita).

Daniel’s training with Mr. Miyagi began after he experiences bullying from black belter Johnny Lawrence (William Zabka)  of the Cobra Kai dojo. The film is concluded with a karate tournament, where he competes with Johnny, who is trained by ex-Vietnam veteran John Kreese.

The film was shot in different locations like Los Angeles, Arizona, and New Jersey.

The film has had a number of film franchises, as well as a Netflix TV show Cobra Kai, where most of the main characters (Daniel, Johnny, Kreese) have been reprised by the original actors.

This David Fincher-directed film was adapted from Ben Mezrich’s book The Accidental Billionaires, which tells the story of the founding of Facebook. It stars Jesse Eisenberg as Facebook founder Mark Zuckerberg and Andrew Garfield as well as co-founder Eduardo Saverin.

The film, shot in Massachusetts, Los Angeles, and Pasadena, tells the story of how Facebook came to be—first, with Harvard student Zuckerberg creating a website called Facesmash, and then building The Facebook with the help of his friend Eduardo Saverin. Conflict arises after twins Cameron and Tyler Winklevoss say that they believe Zuckerberg stole their idea for the site.

Written by Tina Fey and directed by Mark Waters, Mean Girls is a teen comedy film about being in high school. Cady Heron (played by Lindsay Lohan), enters North Shore High School after years of being homeschooled. There, she navigates through the complicated world of high school.

Cady finds herself in conflict with Regina George (Rachel McAdams), the queen bee of the popular girl circle. The two start out as friends, until Regina’s betrayal, which drove Cady into ruining Regina’s reputation.

Shot mostly in Toronto, the film has been praised for the screenplay and the cast’s performances.

Dubbed as one of the greatest action movies ever made, Die Hard tells the story of how New York police detective John McClane (played by Bruce Willis), tries to stop a terrorist takeover in a Los Angeles building.

McClane was visiting Los Angeles hoping to reconcile with his estranged wife, Holly. During a party at a LA skyscraper the Nakatomi Plaza.

by Holly’s employer, it is seized by German terrorists and radical Hans Gruber and his team. McClane figures out ways how to outsmart Hans and his heavily armed men. There is no immediate response from the LA police, and so McClane needs to deal with the problem himself.

The film was shot in Los Angeles, at a building called the Fox Plaza. It has since become a popular tourist destination (but touring inside the building is not allowed). The floor where the film was made became Ronald Reagan’s office.

Based on the Marvel Comics character of the same name, this film stars the late Chadwick Boseman as T’Challa/Black Panther. The film was directed by Ryan Coogler.

The story revolves around T’Challa, a warrior who ingested a “heart-shaped herb” and gains superhuman abilities. He is the heir to the kingdom of Wakanda, a landlocked and hidden country and the most technologically advanced kingdom on earth. He faces his cousin / N’Jadaka Killmonger (Jordan), who wants to start opening Wakanda to the rest of the world and get rid of its isolationist policies. The two face a duel over who gets to take the throne.

This is the first superhero film to get an Academy Award nomination. It won Oscars for Best Production Design, Best Costume Design, and Best Original Score.

The film tells the conflict between a lieutenant and a thief—LAPD Lieutenant Vincent Hanna (Pacino) who investigates a case involving professional thief Neil McCauley (De Niro) and his crew, who did a heist that resulted in several deaths.

The film, shot in Los Angeles, is based on the true story of ex-con Neil McCauley.

In Bridesmaids, a comedy film directed by Paul Weig and written by Kristen Wiig and Annie Mumolo follows the story of Annie (played by Wiig), who faces setbacks before her best friend Lillian’s (Maya Rudolph) wedding.

At Lillian’s engagement party, Annie, who was asked to be the maid of honor, meets the bridesmaids. One of them is Helen, the wealthy and beautiful wife of Lillian’s fiance’s boss. As the events unfold, Annie and Lillian become jealous of each other’s friendship with Lillian, resulting in competitive actions.