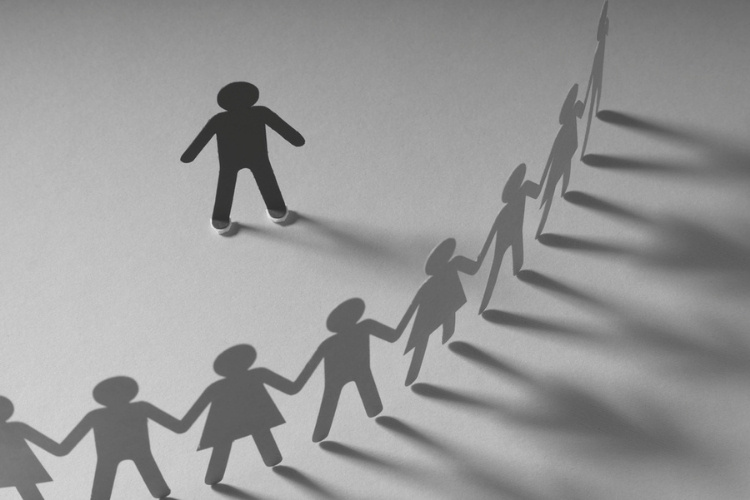 Conflict, a struggle between two opposing forces, is what drives a story’s plot. Confronted by the main character/s, this is what creates the narrative and creates challenges. It’s what the protagonist needs and goes through to pursue goals.

This literary element has four main types: conflict with one’s self, with others, with the supernatural, with the environment, and with society. We’ll center on the last one—a literary example of a person’s conflict with society is Albert Camus’s classic novella The Stranger, where protagonist Mersault finds society meaningless and challenges its moral standards. There’s also Shakespeare’s Romeo and Juliet, where their families’ feud forbids the lovers’ desire to be together.

For this list, we’re focusing on plots similar to these, those that explore how a character faces conflict with something much bigger. We’ll talk about Hollywood films that make use of this storytelling tool by talking briefly about the plot and characters, as well as the film’s creators. From classics like One Flew Over the Cuckoo’s Nest to beloved animations like Shrek, we’ll show movies where the main characters struggle with their relationship with the world around them.

Let’s start off with one of the most famous and iconic comic books from Vertigo comics. Written by Alan Moore and illustrated by David Lloyd, V for Vendetta was adapted to the big screen by James McTeigue and written by The Wachowskis. It stars Natalie Portman and Hugo Weaving.

The dystopian political film follows the story of a man called “V” (Weaving), who, in a fascist and tyrannical regime in the UK, is an anarchist freedom fighter who attempts to have a revolution against a totalitarian government in Britain. Wearing a Guy Fawkes mask, V meets Evey (Portman), a young woman who works at a TV station, who becomes his ally.

Mean and ruthless Lord Farquaad exiles a group of fairy tale creatures to a swamp, where Shrek, an ogre, lives peacefully. This film, loosely based on a 1990 fairy tale picture book by William Steig, is directed by Andrew Adamson and Vicky Jenson and stars Mike Myers, Cameron Diaz, and John Lithgow.

Shrek, an outcast and an anti-social ogre, decides to go to Farquaad to tell him to bring the fairy tale characters elsewhere. He sets out on a journey to get his peaceful life of solitude back—where he will be away from humans who judge and fear him over his appearance. Along the way, he meets friends: a dragon, a donkey, and Princess Fiona, a captive princess who will change his life.

Written and directed by Gary Ross, this film is a film about two teenage siblings (played by Reese Witherspoon and Tobey Maguire) who get trapped in a sitcom from the 1950s—is Pleasantville, a wholesome, seemingly perfect town in black-and-white, but one where people are repressed and blocked from the rest of the world.

The siblings, instead of staying in character, helped introduce the town to the rest of the world. Eventually, Pleasantville starts to have color as the town realizes the different freedoms they could have.

Pleasantville is not a real town. The film’s town was built for the film in Malibu Creek State Park in Los Angeles.

Denzel Washington plays John Quincy Archibald, a factory worker and father who takes a hospital emergency room hostage after the insurance for his nine-year-old son’s heart transplant is declined.

The film is a 2002 drama directed by Nick Cassavetes. Filmed in Toronto but set in Chicago, the film also stars Robert Duvall, James Woods, Kimberly Elise, and Anne Heche. The film is fictional, but according to the commentary, SWAT team advisors said that there was a similar incident in Toronto, where a man took the ER hostage after the hospital did not give an immediate response to his son.

This dystopian film based on a novel by Suzanne Collins now has four installments (with another one in the works). The Hunger Games starts off by introducing the audience to the main protagonist Katniss Everdeen.

Played by Jennifer Lawrence, Katniss lives in a post-apocalyptic future, in a corrupt society that looks at its people as puppets. She is chosen as a “tribute” who will need to compete in The Hunger Games, a televised fight to the death. Throughout the story, she competes with other tributes in the games and against the oppressive society she lives in—starting an uprising against the people in power.

The film’s first installment was shot in different towns in North Carolina like Asheville, Charlotte, and Shelby.

One Flew Over the Cuckoo’s Nest

Based on a 1962 novel of the same name, this film is a  psychological drama directed by Milos Forman, and stars Jack Nicholson and Louise Fletcher, both of whom won Academy Awards for their performances in the film.

In One Flew Over the Cuckoo’s Nest, Randle McMurphy (Nicholson) was serving time for statutory rape but was transferred to an Oregon mental institution (most of the film was shot in Salem, Oregon) after pleading insanity. In the institution, he convinces his fellow patients to rebel against the intimidating head Nurse Ratched (Fletcher).

Rosa Parks, the mother of the civil rights movement, was an American activist. She is known for playing an important role in the Montgomery Bus Boycott in Alabama when she refused to give up her seat to a white man.

This film is a biopic, telling Parks’s story, from her private school days to her battle against racism. Starring Angela Bassett, this 2002 TV movie is directed by Julie Dash.

This one’s a multi-awarded film written, co-produced, and directed by Martin McDonagh and starring Frances McDormand. Three Billboards Outside Ebbing, Missouri tells the story of a mother who rents out three roadside billboards to urge the police to bring justice to her daughter’s death.

Mildred Hayes (played by McDormand, who won an Academy Award for Best Actress), is a mother whose daughter was raped and murdered. She put up the billboards to speed up the investigation, as no arrests have been made for months. The police (played by Sam Rockwell and Woody Harrelson) and the townspeople are not happy with the signs, but Mildred is determined to leave them up.

The film was shot in several locations around Asheville, North Carolina.

The William Shakespeare tragedy has been translated dozens of times to film and TV, and one of the most popular ones was released in 1996. Directed and co-written by Baz Luhrmann, Romeo + Juliet tells a modernized story of the star-crossed lovers played by Leonardo DiCaprio and Claire Danes.

As Shakespeare’s tragedy goes, Romeo and Juliet’s families—the Montagues and Capulets—have been long-time rivals. The couple decides to get married despite their family’s feud. The film is a modern interpretation and is set in the hip Verona suburb instead of the original Verona, Italy.

Most of the film was shot in Mexico City, and some parts were filmed in Miami, Florida.

Mulan is a 1998 animated Disney movie that tells the story of Hua Mulan, the Chinese folk heroine who took her father’s place after he was conscripted to the army. Only men can enlist, so Mulan cut her hair and dressed in her father’s armor to disguise as a man.

Mulan disregards ancient Chinese tradition with her disguise. She goes against society’s belief that only men are allowed to join the army; she struggles to bring her family honor at first but proves to them that a woman can also be qualified to serve.

A live-action version of this film was released in 2020, under Disney+.

One of the promotional posters of Snowpiercer says, “fight your way to the front,”—describing the film’s protagonists. Starring Chris Evans, Ed Harris, Tilda Swinton, and Song Kang‑Ho, this is the English language film debut of Korean director Bong Joon-Ho.

It’s the year 2032, almost two decades after a failed attempt to stop global warming. Humanity is experiencing a new ice age, and what remains of humanity is in a self-sustaining train called Snowpiercer. The passengers are segregated, with the rich in the front and the poor in small compartments. The poor living at the back of the train battle their way to the front, starting a revolution.