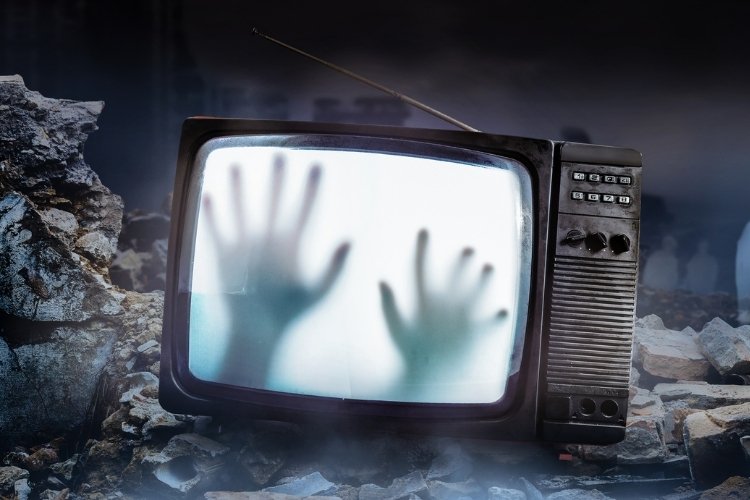 Conflict is an essential storytelling tool. It’s a device used in literature and film that introduces the character to some opposition or challenge This dramatic structure keeps the story interesting, providing a struggle that a character needs to overcome. Without it, there is no plot, no storyline.

There are many different types of conflict: person versus another person, person versus himself, person versus nature, and so on. In this article, we’re going to focus on one type of film conflict that is often used in horror and science fiction films—person versus supernatural. The movies below can serve as a good teaching tool to explain this conflict.

A person vs. supernatural conflict is a type of storytelling style involving a human character who faces conflict against a supernatural force such as magical creatures—anything that cannot be controlled or explained by natural law. Other examples of the supernatural are vampires, witches, a god/gods, and ghosts.

One can find this theme in classic literature, such as Edgar Allan Poe’s The Raven, where the protagonist cannot tell if the raven tormenting him is a supernatural or a product of his imagination. The classic Sophocles story of Oedipus Rex, where protagonist Oedipus faces the curse of a prophecy that caused him to kill his father and marry his mother.

Children’s literature uses this type of conflict as well. In The Lion, the Witch and the Wardrobe, a fantasy novel by C.S. Lewis, the main character Lucy finds a wardrobe that transports her to Narnia, a magical world inhabited by an evil witch. There’s also the story in the Harry Potter series, where the supernatural element is wizardry—Harry fights Lord Voldemort with brains combined with magic.

Below, we’ll discuss some iconic movies that use this type of conflict—from horror classics like George Romero’s Dawn of the Dead and Sam Raimi’s Evil Dead to supernatural comedies like Steven Spielberg’s Gremlins.

This 1984 horror-black comedy film directed by Joe Dante and produced by Steven Spielberg tells the story of a young man given a strange pet called a mogwai as a gift. After he does not follow the three rules (don’t expose them to light, don’t let them come in contact with water, and most significantly—don’t feed them after midnight!), it gives life to more small reptilian monsters called gremlins.

The film, which has produced a hit merchandise line and has become a cult following, has two other follow-ups: Gremlins 2: The New Batch (1990) and Gremlins 3 (in development).

Released in the same year as Gremlins, Ghostbusters is a supernatural comedy directed by Ivan Reitman and stars Bill Murray, Dan Aykroyd and Harold Ramis. It follows the story of the three actors as scientists and parapsychologists who set up a ghost-catching business in New York City. The business involves catching supernatural creatures such as ghosts, poltergeists, and spirits for money.

The characters find a gateway to another dimension that threatens to release evil, so they need to save New York from destruction. The film became immensely popular in the 80s, spawning a sequel, an animated TV series, a reboot in 2016 with an all-female lead cast, video games, and comic books.

The supernatural elements in this Sam Raimi horror classic are demons, unknowingly released by friends who were on vacation at a cabin in the woods. The story revolves around protagonist Ash Williams, played by Bruce Campbell. Ash and his friends encounter “Deadites,” evil creatures possessed by Kandarian Demon.

Evil Dead has four feature films, and a TV series on Netflix titled as Ash vs. Evil Dead. Ash is considered to be one of the greatest movie characters of all time.

Reign of Fire is a post-apocalyptic, sci-fi film starring Matthew McConaughey and Christian Bale, and directed by Rob Bowman. It’s the year 2020, two decades after workers in a London tunneling project unwittingly awakened a dragon from a centuries-long hibernation.

Quinn, played by Bale, has the job of keeping off the beast and its offspring in a world where humans are close to becoming extinct. Van Zan, played by McConaughey, says that he knows of a way to get rid of them.

This is the film that started the hugely popular Predator franchise, a sci-fi action horror anthology with three sequels and an upcoming prequel.

The John McTiernan-directed film was released in 1987 and starred Arnold Schwarzenegger. He plays the rescue team leader that goes to the Central American jungle and encounters the Predator, a technologically advanced alien with superhuman strength. The team faces the intelligent, hostile extra-terrestrial that hunts people for sport, taking trophies from its victims’ bodies.

The Chronicles of Narnia, a series of novels by C.S. Lewis, has a series of films of the same name. Three books were adapted from the seven books: The Lion, the Witch and the Wardrobe (2005), Prince Caspian (2008), and The Voyage of the Dawn Treader (2010).

The first installment is based on the second chronological novel in Lewis’s series. In this first film, four kids travel to Narnia through a wardrobe where they join forces with magical lion Aslan and work together to defeat the evil witch, played by Tilda Swinton.

Independence Day is the highest-grossing film of 1996. This film follows the story of tells the story of a world facing terror. Strange events occur in cities worldwide after an alien mothership arrives on Earth and deploys saucers.

This film, directed by Roland Emmerich and stars Bill Pullman, Jeff Goldblum, and Will Smith, shows humans’ will to live versus sophisticated, high-tech alien technology. Independence Day was shot in Utah, New Mexico, Washington DC and other locations in the US.

Dawn of the Dead

It’s man vs. zombies in the 1978 horror classic Dawn of the Dead. Directed and written by George Romero, this film’s supernatural elements come in the form of zombies.

The story revolves around a traffic reporter, S.W.A.T. team members, and a TV executive who go to a shopping mall to hide from the multiplying zombies. This film is preceded by the Night of the Living Dead, and a total of four sequels. It has appeared on Empire Magazine’s 500 Greatest Movies of All Time. The movie was filmed in Pennsylvania, specifically Monroeville and Pittsburgh.

The Thing, based on a novella by John W. Campbell Jr. titled Who Goes There? is a sci-fi horror film released in 1982. The film is directed by John Carpenter and stars Kurt Russell.

A group of American researchers in Antarctica encounter the extra-terrestrial, shape-shifting “Thing,” which assumes the appearance of other organisms and its victims. The team encounters conflict after learning that ant of them could be the alien.

In 2011, another film called The Thing was released—directed by Matthijs van Heijningen Jr. and stars Mary Elizabeth Winstead and Joel Edgerton. It’s a prequel to the 1982 film. Apart from scenes filmed in California (on a refrigerated studio set), other parts of the movie were filmed in Alaska and British Columbia.

War of the Worlds

Directed by Steven Spielberg and starring Tom Cruise, Tim Robbins, and Dakota Fanning, War of the Worlds is a 2005 sci-fi action film based on a novel by H.G. Wells. The film is narrated by Morgan Freeman.

Cruise’s character is a docker who needs to look after his children, whom he is estranged from. and helps them reunite with their mother—as intelligent, merciless extraterrestrials invade the earth with giant machines and high-tech weapons. Filming the movie took 73 days with filming done in Connecticut, New Jersey, Virginia, California, and New York state.

Another Steven Spielberg-directed film, Jurassic Park is a sci-fi film based on the novel of the same name by Michael Crichton (who also co-wrote the film script). The film stars Sam Neill, Jeff Goldblum, and Laura Dern.

The film is set on an island in Central America, where a group of paleontologists (played by Neill, Goldblum, and Dern) selected to tour an island theme park with dinosaurs made with dinosaur DNA from prehistoric mosquitoes. A power failure occurs, causing the cloned dinosaurs to run loose. Much of the movie was filmed in Hawaii.

30 Days of Night – Man vs Vampires

30 Days of Night was an unsuccessful pitch for a comic book and film before it was produced as a film. Created by Steve Niles and directed by David Slade, it stars Josh Hartnett and Melissa George.

The small town of Barrow, Alaska prepares for its annual month-long polar night during winter. On the first night, the quiet town is attacked by a gang of vampires that start killing the townspeople. Eben and his estranged wife (played by Hartnett and George) and several survivors go to a house to protect themselves from the vampires.

Other Types of Conflict Used in Film: