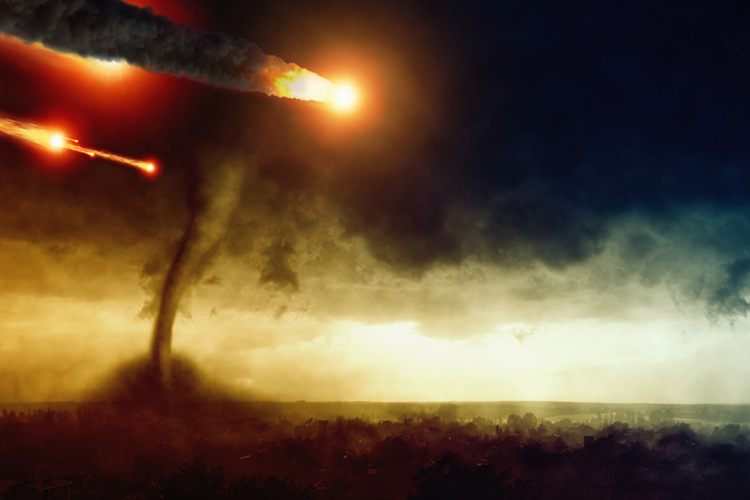 We’ve already delved into several storytelling techniques here in Next Level Pictures, wherein the main character deals with something much bigger—person vs. the supernatural, or person vs. society. In this article, we’ll talk about how characters deal with one of the most powerful elements of all: nature.

A person or character vs. nature conflict is a common tool in storytelling that shows how the protagonist faces the power of a natural force. It’s a form of external struggle that places man against a force of nature like a storm or a tornado.

This is a common literary technique. Some examples include William Golding’s Lord of the Flies, where a group of adolescent boys are stranded on a deserted island after a plane crash and need to face the elements (and themselves) in order to survive. There’s also Yann Martel’s Life of Pi, a fantasy novel where a young man faces physical and spiritual struggles after he gets stranded on a boat in the middle of the ocean. The characters in these stories face a force of nature that’s much bigger than them.

From a group of storm chasers facing a deadly tornado in the 1996 film Twister to a biographical film about surviving a terrifying ordeal in 127 Hours, this article will list some of the best and most memorable films about surviving the wrath of nature.

This James Cameron classic is one of the best examples of a Man vs. Nature story. The 1997 film uses both fictional and historical details on the sinking of the British passenger liner RMS Titanic.

Titanic, which stars Leonardo DiCaprio, Kate Winslet, Billy Zane, and Kathy Bates, tells the story of how the ship sank in the North Atlantic Ocean in 1912 after hitting an iceberg. It centers on Jack, a poor artist, and Rose, an aristocrat who was set to wed her wealthy fiancé.

The film, which was filmed in Dartmouth, Nova Scotia and a studio, was nominated for 14 Academy Awards and took home 11, the most Oscars won by a single film.

Released in 1996, Twister is an epic disaster film about storm chasers facing a powerful storm. Helen Hunt, who plays the lead character Jo Thornton, is on the brink of divorce from Bill Harding, played by Bill Paxton.

Directed by Jan de Bont with a screenplay by Michael Crichton and Ann-Marie Martin, the film was a success, and became the second-highest-grossing film of 1996, and is considered one of the first modern disaster movies ever made. The film was shot mostly in Oklahoma, specifically Wakita, Guthrie, and Osage County.

This film tells the story of a plane crash survivor, who finds himself alone on an uninhabited island.

Chuck Noland (Tom Hanks) is a FedEx executive who crash lands over the Pacific Ocean on his way to a work assignment. He is the only survivor, escaping in an inflatable life raft. After attempts of looking for rescue, he finally accepted his fate and learned how to survive, with the help of his only friend, a volleyball named Wilson.

Directed by Robert Zemeckis, Cast Away was released in 2000. Hanks was praised for his performance and won a Golden Globe for Best Actor in a Motion Picture Drama. The filming location was mostly in Monuriki, one of the Mamanuca Islands in Fiji.

This 1997 movie directed by Roger Donaldson and starring Pierce Brosnan, Linda Hamilton, and Charles Hallahan is about the town of Dante’s Peak in Washington, home to a dormant stratovolcano.

Brosnan plays volcanologist Harry Dalton, who is assigned to investigate a seismic activity near the town. He finds out that the volcano will erupt any minute, causing the town to be on alert, needing to evacuate immediately. The name “Dante’s Peak” is from Dante’s Inferno, which describes a trip to hell.

Dante’s Peak is a fictional countryside town set in Washington. The film was shot on location in Wallace, Idaho.

Directed by Academy Award-winning director Ang Lee, Life of Pi is an adventure film about how Indian teenager Pi Patel (Suraj Sharma) and a Bengal tiger named Richard Paker survive being stranded on the Pacific Ocean for 227 days.

Pi’s parents Santosh and Guta board a ship to Canada after deciding to sell their zoo in India. A storm sinks the ship, leaving only Pi and the tiger as the only survivors. As they are stuck at sea for months, they both learn how to trust each other.

The film, which was both critical and commercial success, was based on a Man Booker Prize-winning novel of the same name by Yann Martel.

This disaster drama, based on the 1997 book of the same name by Sebastian Junger, is directed by Wolfgang Petersen and stars George Clooney, Mark Wahlberg, and Diane Lane. It tells the story of how a confluence of severe weather conditions (two weather fronts combined with a hurricane) forms a deadly storm.

The film tells the story of the Perfect Storm of 1991. Commercial fishing boat Andrea Gail was lost in the storm, leaving a group of fishermen from Massachusetts lost at sea and fighting for their lives.

Some parts of the film were shot in Gloucester, Massachusetts, which has a popular fishing industry and a tourist destination.

One of the most popular movies of all time and considered one of the most terrifying films ever made, Jaws tells the story of a man-eating great white shark, which wreaks havoc on a beach community in Long Island. The film was directed by Steven Spielberg and stars Roy Scheider, Robert Shaw, and Richard Dreyfuss. It was based on a 1974 novel of the same name by Peter Benchley.

Officials find a woman killed by a shark in the tourist town of Amity Island in New England, prompting a sheriff (Scheider), marine biologist (Dreyfuss), and shark hunter (Shaw) to hunt it down. One of the famous filming techniques that Spielberg used is the invisibility of the shark and its now-classic “shark music” theme, an ominous sound signaling terror and impending danger. This was done out of necessity, as the mechanical sharks malfunctioned (John Williams would later win an Academy Award for musical score).

The film is one of the highest-grossing films of all time and was followed by three sequels (without the participation of Spielberg or Benchley). The film was mostly shot on the island of Martha’s Vineyard, in Massachusetts.

Aguirre: The Wrath of God

Produced, written, and directed by New German Cinema pioneer Werner Herzog, Aguirre, the Wrath of God is a film about the power and cruelty of nature and man’s desire to conquer it. German actor Klaus Kinski plays Spanish soldier Lope de Aguirre, a conquistador who is known in real life as “the madman,” styling himself as the “Wrath of God.”

Herzog said that the film is a work of fiction, and just loosely based its story on Aguirre. It quickly gained a cult following and is considered Herzog’s most iconic film.

The Day After Tomorrow

Jack Hall (Dennis Quaid) is a climatologist who has warned the United Nations about alarming environmental concerns. His research, which found a sheared-off ice sheet in Antarctica, was ignored by officials. The study soon proves true when a superstorm starts a series of natural disasters around the world, plunging the planet into another Ice Age.

Jack needs to leave Washington D.C. to go to his son, who starts experiencing bad weather in New York City. As the weather gets worse, his journey becomes more and more challenging.

Directed, co-written, and produced by Danny Boyle, this adventure/drama film tells the true story of Aron Ralson, a canyoneer who gets trapped by a boulder for more than five days (thus the title) in a slot canyon in Utah. He is played by James Franco, who received an Academy Award nomination for Best Actor.

The biographical film shows how Ralston, who was hiking in the Canyonlands National Park in Utah, fought for survival after he had his arm trapped in a boulder. While trapped, he filmed himself a video diary using a camcorder, which recorded his struggle—from hallucinations to the eventual amputation of his arm.

Boyle describes the film as “an action movie with a guy who can’t move.” It was filmed at the actual location in Utah.

Check out our full series of articles on conflict: