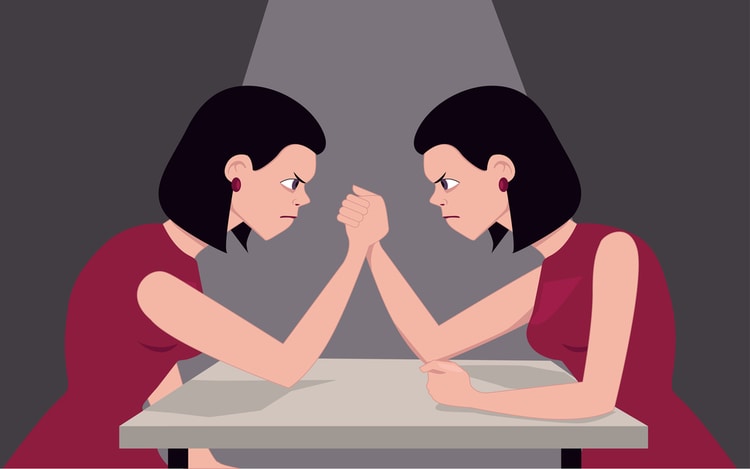 We’ve talked about storytelling techniques that focus on a character’s conflict with external forces: versus nature, the supernatural, and another character. The ones we’ll focus on in this article are films that make use of a character’s struggle with the self, facing an internal conflict.

Person vs. Self, or Man vs. Self, is a conflict in storytelling where a character faces themself. The main usually takes place in the character’s mind—what goes on in their head, their struggle with their own thoughts. This is an important storytelling style where tension takes place from within.

The films we’ll discuss below use the self as the main character’s main source of conflict—such as characters facing identity disorders like the protagonist in M. Night Shyamalan’s Split to a character who lives in solitude in animated films like UP. Some of the films below have spoilers on them, so feel free to move on to the next item if you’re planning on watching.

10 Movie Examples of Person vs. Self Conflict

Based on a novel by Chuck Palahniuk and directed by David Fincher, Fight Club is a 1999 film that tells the story of an unnamed character (Edward Norton), an insomniac who is tired of his white-collar office job. Warning: spoilers below.

On his way home from a business trip, the character meets soap salesman Tyler Durden on a plane. After a series of events (including a house explosion and a fistfight at a bar), the two start what would be called Fight Club, where a group of men meet after work and fight at the bar’s basement.

The unnamed character later realizes that he and Tyler Durden are one and the same person. He has a type of split personality, where Tyler is the manifestation of a person he wishes he could be, doing the things he wishes he could do.

The film was shot in Los Angeles, California.

This tearjerker Disney Pixar film directed by Pete Docter tells the story of Carl (voiced by Ed Asner), a widower who travels to a place called Paradise Falls in a house lifted by balloons. Eight-year-old Russell (Jordan Nagai) becomes his accidental stowaway.

The story revolves around Carl and a conflict he has with himself. His years of solitude have made him sad, lonely, and grumpy—a result of losing the love of his wife early, and him later on living in a neighborhood slowly being replaced by skyscrapers. His journey to Paradise falls with Russell, where they meet new friends: Dug, the talking dog, and a giant bird named Kevin. As the story unfolds, Carl learns how to deal with the heartbreaks, and finds joy in people (or animals) he meets along the way.

Adapted from the Dr. Seuss book of the same name, this film tells the story of The Grinch, a furry green creature who has a heart “two sizes too small.” He lives in a cave on Mount Crumpit cave with his dog Max.

As Christmas approaches in the nearby village of Whoville, he decides to ruin and “steal” the festive holiday from the residents. A six-year-old girl named Cindy Lou Who, however, changes his life.

Directed by Ron Howard and stars Jim Carrey as The Grinch, this film is about the main character’s struggle to fit in. His meanness, which drives people away, is caused by a traumatic childhood.

The film was turned into a computer-animated film in 2018, starring the voices of Jim Carrey, Benedict Cumberbatch, Rashida Jones, and Angela Lansbury, and narrated by Pharrell Williams.

It’s the early 1970s, and William (Fugit), a teenage journalist, is going to write his first article for Rolling Stone. He joins the band Stillwater in their tour and meets Penny Lane (Hudson), a groupie (or “band aid” as she would call it).

While being surrounded by a lot of characters—a touring band, his mother, Penny Lane, and her fellow band aids, and rock magazine editors—William navigates life alone. The film is a coming-of-age story about a young writer who learns about himself while on the road.

The film was shot in San Diego, California, in locations like the Hollywood Roosevelt Hotel and the Continental Hyatt Hotel.

Loosely based on the classic German fairytale by the Brothers Grimm, Tangled tells the story of princess Rapunzel, who has magical long hair. She has spent her life living alone in a tower in the woods, raised by a foster mother who is using her to stay young.

She experiences an internal conflict—dealing with years of loneliness and following her foster mother Gothel’s selfish wishes. However, after a bandit named Flynn passes by the tower, she slowly realizes how she wants to fulfill her dream of leaving the confines of the castle and seeing what happens in the outside world. She starts searching for the adventure she’s been deprived of experiencing.

The film stars Mandy Moore as Rapunzel and Zachary Levi as Flynn.

This Darren Aronofsky-directed psychological horror film stars Natalie Portman, who plays Nina Sayers, a ballet dancer who got the part of playing the lead role in a production of Tchaikovsky’s Swan Lake.

The ballet requires a ballerina to play the White Swan, a perfect role for Nina. It, however, also needs someone to play the role of the Black Swan, which her rival ballerina Lily (Mila Kunis) personifies. The movie centers on the pressures felt by Nina, as she competes for the role. As the performance nears, she faces the toughest competition: herself.

The critically-acclaimed film, which was shot in places like the Lincoln Center for the Performing Arts in Manhattan and Bowling Green on Broadway in New York City, was praised for Portman and Kunis’s performances and Aronofsky’s direction. Portman won an Academy Award and a Golden Globe for Best Actress.

Me, Myself and Irene

Starring Jim Carrey and directed by the Farrelly brothers, Me, Myself & Irene is a comedy about Charlie, a state trooper who was diagnosed with Dissociative Identity Disorder.

Charlie is a nice guy—too nice, however, that he is often taken advantage of by people. His wife cheated on him right after they got married. She eventually left him, leaving behind the triplets that she had with their wedding chauffeur. The triplets respect him, but people in town continue to take advantage. One day, he develops the disorder, and suddenly deals with a split personality named Hank Evans. Rude and violent, Hank is the persona that takes over Charlie when he’s under a lot of stress.

On an assignment, Charlie meets accused felon Irene (Renee Zellwegger). As the story progresses, new truths come out, and both Charlie and hank fall for her. As he faces his alter ego, Charlie learns new ways how to deal with the world around him.

Directed, written, and starring Zac Braff, Garden State tells the story of Andrew Largeman, a troubled young man who returns home to New Jersey to go to his mother’s funeral. The film, according to Braff, is based on real-life experiences.

While visiting his hometown, Andrew gets together with old friends. It’s revealed that he is depressed, and was on mood-stabilizing medications and antidepressants since he was 10. Along the way, he meets Sam, a pathological liar who has epilepsy. As he navigates his life and emotional trauma, he catches up with old friends and memories, and a girl who would change his life.

The film was shot in Braff’s New Jersey hometown of South Orange. Other scenes were shot in New York City and Los Angeles.

Kevin Wendell Crumb, a man who suffers from dissociative identity disorder, has 23 distinct personalities. He has managed them all with the help of his therapist (Betty Buckley).

Dennis, one of the personalities, kidnaps three teenage girls. They need to find a way to escape and deal with all 23 personalities. Their biggest challenge is to escape what is called “The Beast,” who is yet to manifest.

Critics praised McAvoy’s performance and Shyamalan’s direction. This film is a standalone sequel to the director’s 2000 film Unbreakable, starring Bruce Willis. The 2019 film Glass combines the characters in both films, concluding the Unbreakable trilogy.

Another film by M. Night Shyamalan, The Sixth Sense stars Bruce Willis, Haley Joel Osment, and Toni Collette. This is the film that put Shyamalan on the map and got him multiple Academy Award nominations.

This 1999 psychological thriller film shot in Philadelphia, is about child psychologist Malcolm Crowe (Willis), who at the beginning of the movie was shot by a former patient.

A few months later, Malcolm starts working with nine-year-old Cole Sear (Osment), who reveals that he sees dead people walking around like the living. The end of the film reveals that Malcolm is one of these people.